Since the seriousness of the Credit Crunch dawned on world leaders, there has been much rhetoric about the forging of a "green" path to economic recovery - the "Green New Deal" in the UK. Governments around the world have allocated radically different percentages of their financial bail-out packages to the "low carbon economy" and have demonstrated radically different interpretations of "green jobs". Call me a cynic, but the UK car scrappage scheme surely has to be one of the best examples of thinly-veiled greenwash of recent months. Together with the £27m of funding given to Land Rover to develop a "green 4X4", it diverts money away from industries that can offer much larger and much faster carbon savings.

So, it's with great interest that I'm following the ongoing occupation by 25 workers of the Vestas turbine blade manufacturing plant on the Isle of White. 625 "bright green" jobs are at risk on the island as Vestas plan to close the blade-making facility citing UK "regulatory and planning" obstacles to onshore wind as the main reason. 1,900 Vestas jobs could be lost across Northern Europe as "...conditions in Northern European markets have failed to meet expectations".

The "red-green" protest, named in recognition of the common ground established between unions and the environment movement, has attracted a huge amount of attention. It clearly highlights, as already experienced by the UK solar industry, how inconsistent and poorly joined up policies can scupper a seemingly blooming sector. The protest looks set to become a major demonstration over the weekend as numbers are swelled by the arrival of further environmental activists and people who were planning to attend the now-cancelled Big Green Gathering in Somerset. A legal move by Vestas to evict the workers has just been adjourned until 4th August giving more time for protests to grow.

Vestas have stated that the UK plant manufactures blades for the huge US onshore market where large scale wind farm developments are being built (BP claim to be developing a wind farm in Texas the size of Berkshire) and that it makes sense sense to shift production closer to the market. An original 2008 plan to convert the Isle Of Wight plant to produce larger 44 metre blades more suited to UK onshore and offshore turbines has now been halted.

It seems crazy, when the UK has one of the best wind resources in the world and a Government that has announced a huge programme of offshore windfarm development, that the workers at Vestas have to take this kind of action. These are workers equipped with precisely the skills that will be needed to help the UK Governemt fulfil its 2020 renewables target. Vestas, in their latest press release, have left the door ajar for 150 research and development jobs at the plant. As far as large scale manufacturing is concerned, they appear to be adopting a "wait and see" approach until the UK develops into a "strong and stable market".

As usual, it is the renewables industry and, more importantly, the green-collar workers employed in the industry, that have to deal with the uncertainty of inconsistent policy and mixed messages.

There is now a petition on the 10 Downing Street website in support of the Vestas workers.
Posted by Andy Bodycombe at 16:25 No comments:

Wednesday saw the high profile launch of the UK Government's "UK Low Carbon Transition Plan", setting out, in more detail than the generic statements made at G8, how the UK intends to address the twin challenges of reducing our CO2 emissions as well as preparing us for reduced availability and higher-priced oil and gas.

Mid-term targets, missing from the G8 leaders' declaration, include a 34% cut in CO2 emissions from 1990 levels by 2020 as well as generating 15% of our energy from renewable sources by the same date. 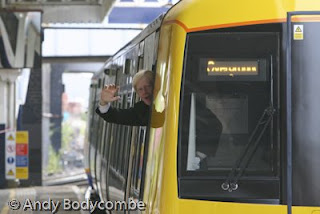 The latest stage of improvements to TfL's Overground services began earlier today as the Mayor of London, Boris Johnson, helped to deliver the first of the new 'walk-through' trains that will be soon be arriving in Crystal Palace.
The Mayor was joined on platform 2 of Willesden Junction station to unveil the first of 54 new trains that will be rolled out across the Overground network betwenn now and 2012, when TfL's ambitious plan to build an orbital railway around the capital should be completed resulting in direct Overground services from Crystal Palace linking with the rest of the London Underground and Overground network. 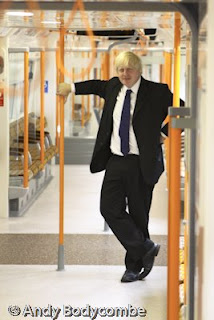 The new three-carriage trains mirror the layout of more typical Underground carriages with flip-down seats and large standing areas but also feature driver-monitored CCTV, disabled access ramps, air conditioning, real-time information screens, wide aisles and a walk-through passenger area that makes the train feel generally more spacious and secure.
The trains will initially be able to carry up to 500 passengers (an eight percent increase compared to the existing trains), rising to 700 passengers when the trains are lengthened to four carriages in 2011.
The extension of the old East London Line to Crystal Palace is scheduled for completion in June 2010 with four trains per hour running from Crystal Palace to Highbury and Islington.

Posted by Andy Bodycombe at 11:25 No comments:

Thursday saw the release of the G8's final declaration on energy and climate and it's clear that achieving a binding and workable agreement in Copenhagen in December will require a lot more work in the coming months.

Observers are already highlighting the key shortcomings of the declaration as a lack of interim or mid-term emissions targets; the failure to establish a clear road map to achieving 2050 targets and a lack of agreement on the baseline date for controlling emissions (ranging from 1990 to 2006).

Despite the G8 declaration, Canada has already stated that it will stick to its original plan of 60 to 70% cuts in greenhouse gas emissions by 2050, compared with the G8's 80% declared ambition.

A new report, "Managing Variability", by independent energy analyst David Miborrow and commissioned by WWF-UK, RSPB, Greenpeace UK and Friends of The Earth, reinforces the recent declaration by National Grid that the UK's electrical generation and distribution infrastructure is more than capable of dealing with a variable input from large scale wind generation:

http://www.greenwisebusiness.co.uk/news/lights-wont-go-out-because-of-wind-power-report-says-566.aspx
Posted by Andy Bodycombe at 14:05 No comments:

Day 1 of the G8 and the first draft communique on climate change (the full announcement is due later today) has failed to identify specific targets or how to achieve them. The focus appears to be on "long-term" (2050) with little on short and medium term measures that can be put in place to keep global temperatures within 2 degrees Celsius of pre-industrial levels.

Waiting for the full announcement but not filled with hope that it will lead to smooth or productive discussions in September or, ultimately, result in a workable and effective protocol in Copenhagen in December.

The power of the Zambezi river is extremely important to the people of Zambia. The Kariba dam on the border with Zimbabwe south of Lusaka holds back 180 cubic kilometres of water, using it to generate about 6,400 GWh of electricity each year - Zambia gets 99.4% of its electricity from this and other hydro plants. Where the Zambezi plunges over the Victoria Falls near Livingstone, tourists are drawn from across the world to get soaked in the micro climate it creates and to marvel at the power of the water.

The people who live along the river are used to its rise and fall through wet and dry seasons and have adapted to the seasonal floods that shift its course and enrich the flood plains with nutrients to grow crops. Rituals and ceremonies associated with the river are embedded in local culture and people are used to having to move away to allow the Zambezi to do its work in late March and early April.

But rainfall in recent years has become more erratic and the communities living alongside the river as it snakes through western Zambia are now feeling the effects of climate change. More than 30 people died in just small part of this region when the floods arrived early and with great force. This is just one small example of how communities and countries who make the smallest contribution to global emmissions of greenhouse gasses are quite often the first to be on the receiving end of the resulting impacts.

Coverage of the recent early floods near Mongu can be found at:
http://www.guardian.co.uk/environment/2009/jul/06/zambia-flood-climate-change

I plan to use this blog to highlight other stories like this, remotely from my desk in London or in person from the scenes, and to bring home the impact that climate change is already having on populations around the world.
Posted by Andy Bodycombe at 12:32 No comments: