Image : DECC
The DECC's latest Act On CO2 TV ad campaign, "bedtime stories", is facing investigation from the Advertising Standards Authority (ASA) and has come under fire from bloggers and commentators (avid environmentalists and climate change sceptics alike) for being simple "scaremongering".
The TV ad features a father reading a bedtime story to his young daughter. The picture book tells the story of a mystery land, "...where the weather was very very strange". We see crying rabbits in a dried up river bed. As the story goes on to say that "Scientists said it was caused by too much CO2 which went up into the sky when the grown-ups used too much energy", we see a jagged tooth dark-limbed monster hanging in the sky, threatening all below. The main point, that "it would be the children of the land who would have to live with the horrible consequences" is emphasised by a sad drowning dog before we hear that 40% of CO2 emissions come from things like "keeping our houses warm and driving cars". Finally the daughter asks if there's a happy ending. We don't see the father's response.
So, who is this ad aimed at ? Who is it designed to touch and to spur into action? According to the DECC: "Running on television, press, outdoor posters, cinema and online the campaign is designed to raise awareness of climate change, convey the imminence and the need for urgent action".
If we filter out the many YouTube comments from those denying the link between CO2 emissions and climate change or from those who deny that climate change is happening at all, we are left with a consensus view that the ad is pure "scaremongering".
But I'm not so sure. OK the ad does use some fairly deliberately crude imagery (the monster in the sky, drowning dog, weeping rabbits) to depict a horrible helpless situation, but the fluffy illustrated style is clearly not aimed at children. It's aimed at the parents. The people who make choices about their lifestyles now that will leave a legacy for their children. As the voiceover at the end of the advert says: "It's up to US how the story ends. See what YOU can do. . . "
So is this "scaremongering". Does it set out to frighten parents or frighten their children? My opinion is that it's a sledgehammer exercise in "guilt-tripping". Does that work? Will people look at their children and, having seen this ad, suddenly feel an overwhelming sense of "My God, what am I doing to the world and what am I leaving my kids to deal with?". I don't think so.
Making people feel bad or feel guilty will surely only raise their defences. Particularly when it involves criticising the way they care for their children - because that's what the ad is really saying. If you don't care about your kids, carry on doing what you're doing. They probably feel a little guilty already and reminding them of this guilt will result, in most cases, in hostility. It will press the wrong buttons.
Let it come from the kids. Let the kids make their own parents feel guilty and perhaps something will change. That's why I think it's so very important to get into schools and make sure that kids of all ages are being presented with facts about climate as well as some simple, easy to implement solutions. There are already organisations and charities like EcoACTIVE out there doing just that. There are a multitude of "teachers resources" provided by a multitude of charities but what's really missing is big-budget (this single ad campaign is reputed, according to BBC News, to have cost £6m by the way) well coordinated Government commitment to environmental education.
Posted by Andy Bodycombe at 21:31 1 comment: 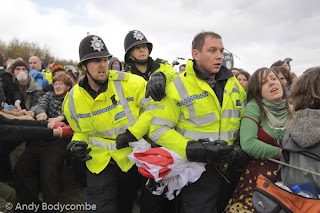 Click here for more images from this story
Ratcliffe-on-Soar, Nottinghamshire, UK: On Saturday 17th October 2009, up to 1,000 demonstrators from a coalition of climate change campaign groups including Climate Camp, Plane Stupid and the Campaign Against Climate Change, descended on E.On's coal-fired Ratcliffe-on-Soar power plant. Their stated aim was to enter the plant and shut it down. There were repeated clashes with police as the "swoopers" attempted to breach the perimeter fence. Several protestors and police were injured in the clashes.
Posted by Andy Bodycombe at 11:00 No comments:

I have a stack of notes ready for blogging. I've been away and out of signal range. Nothing more exciting than the north Norfolk coast but just enough to stop me blogging or tweeting (@andybodycombe). So what better reason to come back to a full signal and get writing again than the Blog Action Day 2009. This year's topic - climate change.

I've written before about the challenges of motivating a change in behaviour and that challenge remains. I'm going to be in Copenhagen in December, documenting the stories of people outside of the main COP15 talks. These may be climate change deniers operating at the periphery. They might be representatives of communities already affected by the impact of climate change. What do I hope to achieve by being there? I hope to put across the range of motivators. What makes people decide to make the journey to Copenhagen? What are their hopes and fears for the COP15 fortnight?

I don't want to fly to Copenhagen. I've already forfeited a friend's wedding in Barcelona in the last year as part of my pledge to cut out short-haul flights. What's the cost of not flying? It's ridiculous! A £51 fare on EasyJet from London to Copenhagen is up against a £320 foot passenger ferry ticket from Harwich to Esbjerg (you get to share a cabin with five strangers for that tidy fare) or roughly £250 on various train tickets to get from St Pancras to Copenhagen. No wonder people opt to fly when the price scales are tipped so far in favour of budget air travel. How do you go about prizing people away from RyanAir (don't get me started) and EasyJet and onto high speed rail when ticket prices fail to reflect the TRUE environmental costs of air travel?

So, more posts coming soon - please keep reading. Generally on the theme of "what does it take to get people to take responsibility and take personal action" rather than "what should somebody else (generally a politician) do". Some great pieces on food security in Sunday's Observer Food Monthly to get you in the mood.
Posted by Andy Bodycombe at 21:16 No comments: