Some really good blog postings from photojournalists attempting to cover the climate camp including. . .

This one on The Guardian's use of a Flickr site to try to capture free images from people inside the camp written by Jonathan Warren. Browse his site for other pieces on media access.

And this one on general media access to the camp from Marc Vallée.

The camps own media guidelines.

Posted by Andy Bodycombe at 22:38 No comments: 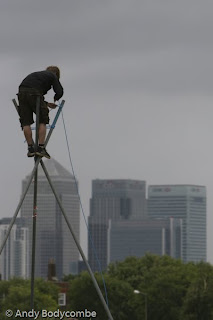 With just 100 days to go until the start of the COP15 climate talks in Copenhagen, this year's Climate Camp was finally established this afternoon on London's Blackheath, site of many a revolutionary meeting over the centuries.

Several "swoop groups" assembled at significant points around London including the headquarters of Shell, the Bank of England and Stockwell Underground station.

I waited with the Stockwell "Blue" group as we all waited to hear of the final location for the camp. As noon came and went with no mass text received, news came in that other groups were on the move around London in an effort to create confusion over the site of the camp. Finally, after two hours of waiting, the message arrived and we headed from Stockwell to Greenwich station before walking up to Blackheath where the signature tripods were already up and the Herras fencing was almost complete. 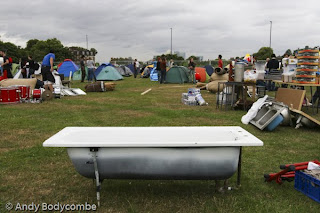 With a commanding view of Canary Wharf, one of London's key financial hubs, the site will now serve as a base for a week of workshops, talks and actions. The climate at the camp this afternoon was one of well-organised and efficient activity - site maps became districts as tents, work spaces and composting toilets were assembled and tested. Bath tubs and kitchen sinks stood stranded, awaiting plumbing.

Something was missing - conspicuous by its absence. Policing. By the time I left the camp before this evening's 6pm media curfew, I'd seen about 10 police officers around the edge of the camp as well as couple of patrol cars. Even the late appearance of a police helicopter went almost unnoticed as it hovered about a mile to the east of the camp.

"This is so much easier than last year" a woman commented as she wheeled her bike around the zig-zag entrance barriers. A reference to the airport security style stop-and-search points operated by Kent Police at 2008's Kingsnorth camp. Her amazement was met by a cheeky "I can frisk you if you like!" from a fellow climate camper waiting at the gate.

The Met's soft policing policy appears to be playing out although today's statements about "letting the camp set up" peacefully still leave questions and doubts about how policing might change in the next seven days. How will the police respond if direct actions are launched from the camp?

With Climate Camp 2009 just a single 202 bus journey away from me this year and my recent camping plans for the Yorkshire Dales cut short by overflowing campsites, I'm tempted to join the camp and find out more about the plans for Copenhagen. Only 99 days to go now and early talks appear to have stalled over the developed nations' reluctance to act first.

Death of The Nile Delta

I'm just back in London after a couple of weeks on the Norfolk coast around Happisburgh. It's one of the fastest eroding stretches of the UK coastline after the 1950s revetments, installed following catastrophic east coast floods in 1953, started to fall into disrepair and the sea caught up with 40 years of blocked progress. I've been visiting Happisburgh for the past 20 years and have witnessed the formation of a beautiful new bay, slowly nibbling its way into the farmland south of the lighthouse, as well as the more dramatic cliff falls and loss of houses between the old lifeboat ramp and the new bay. Rock armour added more recently has slowed the erosion to some extent but a walk along the base of the cliffs gives you a robust appreciation of the power of the sea and the futility of half-baked attempts to hold it back.

It makes me realise just how easy it is for us - to leave Happisburgh behind and head to London and its perceived invincibility. There are vast areas of the world where the march of the sea inland goes completely unchecked and where the number of people displaced will be huge. Add in the potential sea level rises from the various climate forecast scenarios and the world will have to deal with migration of populations on a massive scale. London and other major cities may well experience what is happening right now in Bangladesh, Alaska and the Nile Delta.

A recent article in the Guardian's G2 magazine really summed up the impact of sea level rise, increasing salinity of groundwater and the fragility of water supplies, by looking at the Nile Delta. Jason Larkin's images help portray an area under serious threat and Jack Shenker's report really brings home how people might only wake up to the impact of climate change when they are personally touched by its consequences.

There will be more from Happisburgh and some latest images over the coming months.
Posted by Andy Bodycombe at 11:46 No comments: 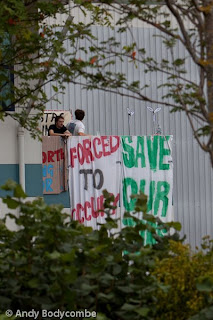 Seven workers at the Vestas plant in Newport, Isle of Wight, remain inside the building this evening despite Vestas obtaining a possession order in court earlier this morning. Four of their colleagues left the plant during the afternoon, deciding to bring their protest to an end so that they could be reunited with friends and families.
In a statement read out on their behalf, they thanked everyone for their support and promised to speak directly to the media once all the protestors had left the plant and were reunited.

It had been unclear earlier in the day how events would unfold as the court's decision was relayed to the 300 union activists, climate change campaigners and Vestas employees waiting outside.
Protesters marched quickly back from the court to the plant as rumours circulated that the bailiffs had gone in as soon as the court had granted Vestas the possession order.

The rush back proved unnecessary as the now familiar faces of the "balcony boys" were spotted in their usual place. As the gathered red-green alliance digested the news that the occupiers could now be removed, there was some frustration and disagreement about what to do next. Union reps said that it was a workplace dispute and therefore up to those inside the plant to decide what happened next. Climate campaigners were keen to highlight the other key message of the campaign - that this is about Green Jobs and the UK's wind energy manufacturing capabilities. 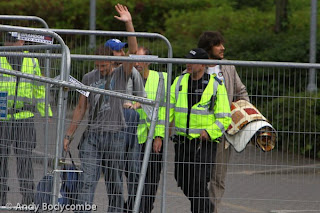 Some confusion remained this evening about who was left inside the building. One unnamed workers opted to leave by a back exit but Chris Ash, Mike Godley and Seb Sikora emerged, after being searched by police, to an emotional reunion with families, friends and supporters.

As I crossed back to Portsmouth, the irony of this being Cowes Week was not lost on me - a week where everyone relies on the power of a free natural resource - the wind - to propell their boats. And a week that could also seal the closure of the UK's only wind turbine manufacturing facility. Other Vestas facilities are this evening being occupied so the story looks set to continue.
Posted by Andy Bodycombe at 21:06 No comments:

Support for the 20 workers occupying the Vestas blade factory on the Isle Of Wight continues to grow as it becomes a symbol of the unexpected struggle to protect green jobs in the UK.

Members of Workers' Climate Action today glued themselves together to block the main entrance of the Department for Energy and Climate Change (DECC) in a show of support for the Vestas workers.

Vestas are due to resubmit papers to the court in Newport at 10am on Tuesday in a repeated attempt to evict remaining protesters from the factory. Attempts to serve notices last week were rejected by the judge as Vestas failed to present paperwork correctly.

Protesters are expected to gather for a march to and from the court. The workers in the factory have said that they will leave peacefully if Vestas secures the paperwork they need to evict them.

I will be in Newport on the Isle of Wight to follow the story and will be posting images on this blog.
Posted by Andy Bodycombe at 21:23