"Why Don't They DO Something" 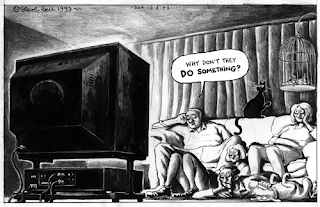 Image copyright Steve Bell, 1993
I sat down in front of streaming coverage of yesterday afternoon's UN session on climate change in the vague hope that I might be witnessing a turning point in humankind's response to what is now overwhelmingly agreed to be a problem of our own making - dangerous anthropogenic climate change. I was hoping for one of those Berlin-wall-falling or Mandela-being-released moments I had witnessed in my early 20s. A procession of world leaders declaring that they were deadly serious about stopping runaway and dangerous climate change and setting out their intentions and targets in advance of final talks in Copenhagen later this year. I had hoped to witness a UN epiphany and, with one eye on Twitter feeds from the UN floor and from commentators around the world, I watched as Barack Obama stepped up to the podium.
What followed was a river of rhetoric but with little substance. Obama looked tired. Bored even. The gravity of the failure-to-act scenarios he painted was delivered with the integrity and passion of a near-to-retirement science teacher explaining the basics of the periodic table (that was my personal experience of O level chemistry anyway). Perhaps it was the cold green marble backdrop that gave the delivery such a deathly tone. The cold mortuary slab onto which, according to many observers, Obama was laying any hope of a binding Copenhagen agreement including the US.

My mind wandered as he continued. One thing that I find slightly frustrating and perhaps counterproductive in attempts by many world leaders to stir up passion and action on climate change is their failure to talk openly about the thing that really motivates most of humankind to act. References to "saving our planet" and "saving the earth" unfortunately leave many people feeling disengaged and distanced. Some people will only ever engage with issues that they face directly each day and that obviously affect them personally. They will fail to see how "saving the planet" really has any relevance to their lives.
As humans, we often feel that we define the planet we live on but, hard as it might be to entertain this idea, planet earth will be just fine in the long run without us. Something that dawned on the Apollo astronauts as they looked at back at a shrinking earth on their way to the moon. We may well end up wiping ourselves out like a self-consuming bacterial colony. We may well end up dragging entire ecosystems and species with us as we plough through and gorge on the resources that are in our care. Species and habitats are already being, and will continue to be, destroyed in the bow wave of unchecked human activity and many more would certainly be lost in our wake.
What does make people stop and think? I live in hope that human nature will, very soon, lead people to be shocked, affected and motivated to change their long-established behaviour when faced with evidence of what is already happening to other humans as a result of climate change and what could easily happen to them too. The challenge for me as a photojournalist and for all other media professionals is to make people think about the impact their lives are having on the people of Bangladesh, the Maldives, most of sub-Saharan Africa. . .the list goes on, and feel empowered and motivated to change.
As Obama brings his speech to a close, what he, and others leaders like him, are really describing is the struggle not to protect the planet, but to protect the future of humankind.

Don't get me wrong. I'm certainly not one of those people who thinks only of human survival. I believe passionately that we have a duty to look after the world we have inherited and to think about, understand and care about the impact we are having on the planet. But, I'm also realistic enough to recognise that this isn't what drives everyone. Many observers have recognised that bombarding people with messages of doom and destruction can leave us feeling powerless to act and to switch off, become defensive or even hostile.
As Obama's warnings of "morally inexcusable" inaction drew to a close without any indication of how he intends to get his climate bill through Senate, I realised that the challenge remains. How DO you persuade people to change their own behaviour and not sit back and pass all personal and moral responsibility to their Governments?
As I made a cup of tea after Obama's speech, I chuckled at the old 1993 Steve Bell postcard stuck to my fridge. A family are slumped on and around a sofa bathed in the light of a glowing TV set. They look as though they've been there so long that they have become part of the sofa. We can't see what's on the screen but we can assume it's something bad happening in the world. "Why don't they do something?" utters one of the family.
We all have to do something. Soon.
Posted by Andy Bodycombe at 09:00 No comments: 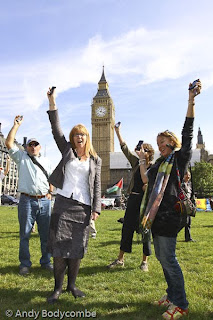 More images from Parliament Square "Climate Wake-Up Call"
There is growing concern, and increasingly frequently reporting, that rolling global climate negotiations appear to be stalling in the run-up to talks in Copenhagen in December. On the eve of the latest climate negotiation session at the UN, protestors from a coalition of groups around the world have taken part in a "Climate Wake-Up Call" to highlight the need to kick-start negotiations.
At 12:18pm, representing the 18th day of the 12th month, the date on which negotiations in Copenhagen will have to be completed, phone alarms starting ringing around Parliament Square in London. As the rings grew louder, hundreds of protestors converged on the grass in the middle of the square and started shouting, ringing bike bells and joining in a chorus of "tick tick tick...." As the alarms stopped ringing, people started calling Ed Milliband and Gordon Brown in an effort to swamp the DECC and Number 10 phone systems with "Wake-Up" calls.
Anna Roma, a freelance cabinet maker from London, managed to get through to Ed Milliband's assistant and was told that questions had to be submitted by email. Another protestor, Iris Andrews, managed to get through to Gordon Brown himself. The conversation lasted almost 5 minutes and Mr Brown gave her his assurance, as reported in today's press, that he would put pressure tomorrow on other world leaders to attend the Copenhagen talks personally. Mr Brown, under pressure from Ed Milliband, has recently announced that he will attend the Copenhagen talks in person stressing in today's Newsweek that "The negotiations are proceeding so slowly that a deal is in grave danger". In an apparent to the potential for creating green jobs as part of a green recovery, Mr Brown added "The UN talks are not just about safeguarding the environment, but also about stimulating economic demand and investment".
Tomorrow's talks at the UN in New York are crucial in getting world leaders to focus on the task in hand. There is a real danger, as reflected by recent comments from the US negotiating team, that people stop regarding Copenhagen as a key deadline for talks. There is already talk by the US team of "negotiating beyond Copenhagen". Something that the "TckTckTck" campaign want to avoid. Paul Hilder of Avaaz, one of the coalition of groups involved in the Wake-Up Call said that the success of today's action "totally blew him away" and hoped that Gordon Brown's call to other world leaders to attend Copenhagen talks would prove fruitful. "It feels like a big step forward right now. What's more . . . this is just one of 2,000 flash mobs happening all around the world from Beijing to New York wher people are calling on their Governments to do this thing. I'm excited."
Posted by Andy Bodycombe at 15:18 No comments:

It's Not Just About Ice 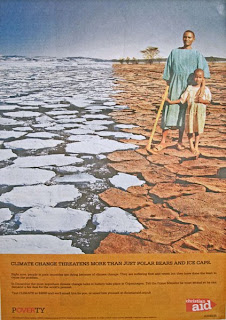 People have become very used to images of polar bears clinging to remnants of ice bergs or floating on small isolated islands of sea ice. Such images are used to highlight the problems of climate change and its impact on Arctic and Antarctic ice volumes and the fauna of those areas. WWF's ads encourage people to adopt a polar bear but make no mention of the wider impacts of climate change.

But how do you make something like loss of sea ice or the melting of the Greenland ice sheet tangible to a member of the public. How do the public relate to images of icebergs calving into the warming waters of the Arctic? How do such images relate to their lives and, more importantly, how do such images make people think about their own impact on global climate change or influence their behaviour? It's very easy to adopt a bear, ease your conscience, and then do nothing about your own CO2 emissions.

The new ad campaign from Christian Aid goes someway to connect familiar melting ice imagery with the direct impact climate change is already having on the lives of people all over the world. From the "Africa Iceberg" image to the latest "Cracked ice, Cracked Earth" image (shown here), Christian Aid are trying to focus our attention on the immediate impacts of climate change. Displacement of populations, failed, unseasonal or extreme rainfall, loss of livelihood. All of these things are happening now and the challenge is to persuade people to act before, as can often be the case with human nature, they feel catastrophic impacts of climate change themselves.

It's a challenge that photojournalists need to accept and I hope to help make that connection between our actions as individuals and the direct impact those actions are having on individuals somewhere else.
Posted by Andy Bodycombe at 15:15 No comments:

A Day Of Actions 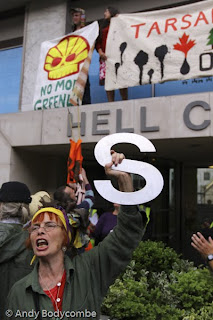 Activists from Climate Camp finished off a day of actions in central London on Tuesday by occupying the canopy above the main entrance of Shell's HQ building on the South Bank.

After earlier protests at RBS head office in Bishopsgate and at the offices of EON's PR agency Edelman, activists moved on to BP's HQ in St James Square before heading across the Hungerford Bridge to pay Shell a visit.

After speeches, several protestors climbed up onto the ledge above the main entrance. The "S" from Shell's sign was quickly removed leaving the building branded as "Hell Centre". 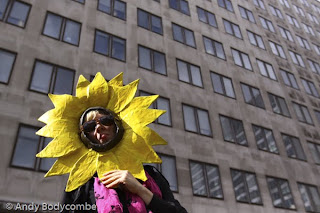 As campers returned to Blackheath this evening, some passing via the 10:10 campaign launch at Tate Modern, they will be hoping that today's actions have given their message a higher profile than it seems to have achieved over the past 5 days.

Today's Guardian editorial piece sums up the challenge ahead in persuading individuals, businesses, organisations and Governments to change their behaviour in order to avoid dangerous climate change: "All great causes involve a tension between collective belief and individual action".
Posted by Andy Bodycombe at 23:24 No comments: